Despite its rather ominous name, BLACK FRIDAY is, here in 2020, really quite a happy affair, especially if you are a retailer or a shopper. Mired in the vacillations of history, theories abound on the real origin of “Black Friday”. The most authoritative account is not such a happy one. Revolving around an effort in 1869 to inflate the price of gold so tow financial weasels could make a killing. They did, as the rest of the market crashed. 24 September was a “black” day, indeed. Flash to the 1950-60s. In Philadelphia, the Saturday of the Army-Nave football game brought thousands into the city. Smelling retailing opportunity, store owners welcomed the throngs with bargains galore. Bedlam ensued. Traffic snarled and so did shoppers as they rushed to grab their prizes at discount prices.

For the retailers, as one theory has it, it was a day when a long period of operating “in the red” became a chance to bring account ledgers “into the black”.

By the 1980s the phenomenon had settled into a more civilized (sometimes) routine. The day after Thanksgiving Thursday became a day of shopping nirvana. Some stores even opened on Thursday itself, but that was a bit unfair, not as much fun as the Friday frolic, and frowned upon by the aficionados of the special day.

In Singapore, the idea has caught on in a big way. Eager, in these Covid-19 days, to entice shoppers either in person or, more likely, online, merchants are relaying a myriad of products to have their prices significantly lowered. All kind of products, to be sure, but if you think this might be a great time to stock up on premium beauty you would be right, smart shopper. There will plenty to choose from, but, to help narrow down the choices. Here’s a quick peek at some of the best products.

What’s Inside the 2020 The Black Friday Edit LOOKFANTASTIC Beauty Box?

Dennis Gross calls this “Serum” for a reason. Combined with vitamin C, it aims to improve the colour, texture, and radiance of the skin. Good for any skin, but especially for ageing skin that needs revitalization.

Containing magnesium and diamond-shaped crystals the microdermabrasion smoothes as it wipes away dead skin and impurities. Yet, it causes no irritation or scratching while doing so. While accomplishing this feat, it eliminates fine wrinkles as it refines the skin.

Eyeliner with a difference. And the difference is small, tiny, in fact. The precision point of this finely accurate pen, give cour-intense, smudge-proof results that last all day. With conditioning Laminaria Ochroleuca Extract, it strengthens and brings glowing health to eyes.

It’s glossy! Like a wet cherry! And it smells like … CHERRIES, of course. Wet Cherry is formulated with “iridescent pearls” that positively light up lips. It delivers in a cute little tube and an art-brush-like applicator that flows over lips and glows.

Use it in the morning and evening over the whole body to soften and illuminate all skin types. With natural ingredients like oils of camellia, argan, sweet almond, macadamia, hazelnut and borage, it gives a delightful scent as it moisturizes and illuminates the skin leaving it with a satin finish.

As the name implies, Sleeping Smoothie is a fresh, cruelty-free, vegan serum that moisturizes as you sleep leaving skin with a morning glow that stays with you all day until you are ready for sleepy time again. Plant-based technology is fragrance-free and natural. The packaging and ingredients are designed to tread lightly on the planet and on you!

Vitamin B5 helps to moisturize and balance the skin’s elements to soothe and firm at the same time. Natural ingredients nurture the skin and provide resilience and suppleness. The result is a glow that softens wrinkles as it beautifies.

Under-eye gel packets help to firm skin ad lessen puffiness. In so doing, wrinkles are lessened and smoothened. As your under-eye skin slowly firms around the effects of a stressful life, the inner glow comes to the surface calming your look and your psyche. 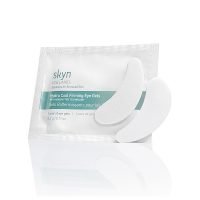 Designed to calm irritated skin, this Ultra-Repair Cream is first aid for skin that has seen just a little too much wear and tear. As it moisturizes, the cream reduces itching and rash of eczema and other skin maladies. Just a small amount massaged into the face gives your skin a new, fresh feeling s it gives you a new outlook.

Treat your hair to a rejuvenating session as you style. Smoothness, volume, conditioning, strength, and polish – count them – that’s five – Five In One. It adds shine and is safe for chemically-treated hair. PETA-certified to be cruelty-free you can take comfort in using this environmentally conscious product.

With an array of colors and glitters, the palette gives free rein to your artistic tendencies as you fashion a look that suits YOU best. If you think pink and rose tones are not really your thing, give these subtle, delicate hues a try. Have a ball trying the different colors and combinations. Let your eyes have it! Handsomely packaged in a box that will look great on our table.

Janiqueel loves. She loves to dine, to drink, to travel, to primp, to rave, and to revel. She celebrates her life and believes in loving without boundaries, polyamorously. This philosophy informs her stylish lifestyle blog – janiqueel.com. Here, she highlights new products and services in Singapore and beyond through bouncy writing and vibrant graphics. Her premier subject, model, charmer, and squeeze is her toddling son known affectionately to readers as “Mr. C”.

Review: Cooking our way to perfect skin with Ecooking

Protect, Restore and Balance the Skin from Within…

10 out of 10 for Skincare Minimalism

How to Colour Correct?

Mastering the art of Beauty Sleep